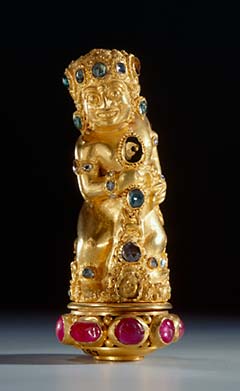 The Bihma figure was stolen as part of a treasure from Lombok during the Dutch colonial war and taken to the Netherlands. If we take this into account, can we say it’s ethically considerate to display a stolen object like the figure at one of our museums so that Dutch people may admire it, keeping in mind that the people of Lombok themselves can’t?

Considering the past of objects such as the Bihma figure, one could question whether it’s ethically considerate to display these objects in Dutch museums.

I personally think we’re missing a perspective here, and that is the perspective of the people of Lombok. Because I as a Dutch person have the privilege to see my own heritage in museums,

but I wonder that if we show the heritage of places like Lombok in Dutch museums, then are the people of Lombok themselves still able to see their own heritage?

To answer this question, I’d like to look at the political discussion that arose surrounding the Lombok treasury. Eventually,

it was decided that the Dutch were righteous to have stolen the treasure, as the ruler of Lombok had created this treasury at the expense of his own people, and by stealing this treasure the Dutch acted to promote indigenous Lombok civilization and Asian art history

(these were the words of the Dutch government, not mine).

Personally, I see a big problem here, and that is the lack of indigenous voices in this matter. The only person from Lombok whose words we have heard was that of the radja or ruler of Lombok, not of the citizens themselves. As a practicing constitutional monarchy,

I would say it is wrong of the Dutch government to not chime in to see what the indigenous people of Lombok themselves think, especially given our history of oppressing and milking of places like Lombok.

Not knowing the exact provenance of an object like the Bihma figure also poses a problem on its own. When looking into this, I found it hard to find the general laws regarding the acquisition and display of objects of museums, and instead found many individual guidelines from museums that dealt with problems like in this case, not knowing the object’s provenance.

Even when looking at the International Code of Ethics for museums provided by the Museum Association, this states that

‘All museums are bound by national laws and international conventions relevant to museums. The code supports this legal framework and sets a standard for all areas of museum practice’.

So again, in theory, the Dutch government could decide to simply ignore parts of the Code of Ethics, provide a reason why they believe they are allowed to ignore these parts, and then display items from for example Lombok, with a problematic history and with ethical questions still raised. One might even say this is exactly what the Dutch government did in the case of the Lombok treasure, to end the debate.

Personally, I think we can’t easily say whether we should display objects like the Bihma figure or not, because

there are things at play that go beyond a regular citizen’s power – such as politics. I believe that if we were to display objects like these – in this case, if the government decides we have to do this – then we should at least make sure museum visitors know of the ethical debate surrounding the objects and of the object’s history.

We should provide a context, so to say.

We should definitely take the history of the objects – no matter how problematic or controversial this may be – into account when designing ways of displaying said object. I’d go as far as to say that because Archaeologists and Historians are meant to look at the whole context of an object in the case of research, we as Western citizens should also look at this in the case of display. We should, in my opinion, take into account how museums acquired objects.

We owe it to all generations of the past, present and future to share history and culture in its full context. At least, that is what I believe.

I'm Rachel. I'm 19 years old and I'm a reader, writer, artist, and student of Archaeology at Leiden University. This blog is reserved for posts on neurodiversity, books, writing, art and archaeology. Feel free to hit me up if you have any questions or concerns by using my contact page. View all posts by Graceful Goddess